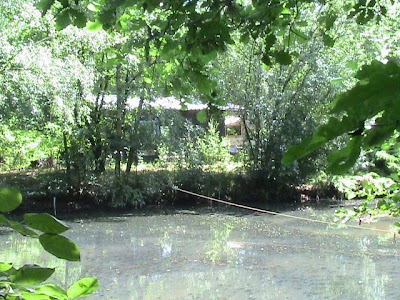 Economy’s daughter Social married a guy named Politics…
And they had many children in different states and stages
Situations tend to function quite a bit different then they are described in that part of the media that has to many readers or watchers. Independent judgment is only possible when one considers the situation and the needs of the world as a whole. Learning to put facts in a broader perspective, dealing with insinuations. The more one succeeds in doing so, the more chance a progressive policy gets. Most of let things go their way and only when situations are really too much to take and one unites only to save a part of the furniture, leaving structures as they are, because politically the social movement was an orphan.

We are connected not only by blue lines (personal relations), but also by red lines, the econ-socio-politico-eco ones in fact. Our blue lines can benefit from a good condition of our red lines. The red lines are dominated by all political parties from far right to the spectrum of the left parties. If the individual no longer wants to stay without a voice concerning wars, poverty and social and ecological issues…or does not learn how to use telematics to oblige politicians to listen to them…the decadent part of politics will continue for much longer. (see text ‘to all’ on http://bloctaafblogartist.webs.com/apps/blog/ ) (and to ‘dear fellow world occupier’) on http://bloggen.be/conscience2008 ) We must obtain insight and a vision in order to understand history on his way to providing the planet with an ecological system of production so that in the end, if we plan this socially, we can span more free time in doing other things related to the meaning of life. Most of us have a daily life consciousness that prevents them from understanding what is happening fully and shows them in what kind of play they play. One has to learn how one can become as objective as can be. The higher the degree of collective consciousness the more possibilities for the individual. Why so many people rather like a populist then an intellectual approach ? They really want to show solidarity but they are divided in a lot of groups. questions for workers
Why is it we are still being ruled by representatives of bancs ?
Why you work so hard while so many are without a job ?
Why is having a job not normal ?
Why can't you easily find a new job ?
Why our telecom services, our energy and transport are not free ?
Why still not one worldcurrency or an administration based on need ?
Why some of us need the discpline of old ideologies to function ?
Why not our inner discipline or the one of our colleagues in charge ?
Why not we but them should be afraid of doiing away with speculation ?
Why does the same product does not cost as much everywhere ?
Why is poverty a form of official slavery ?
Why so few people control so much wealth ?
Why so few robots comand so many soldiers ?
Why religions are not as much spiritual then our inner energy ?
Why imperialism calls war humanitarian aid, free world and democracy ?
Why do criminals control economy, whether in USA,ex- USSR or Liberia?
Why do tradeunions follow the games of bigmoney ?
Why do we not understand that 'foreigners' can be workers to ?
Why we still make weapons to kill our comrades elsewhere ?
Why do kings and queens still exist ?
Why not use technology and technocracy to build a beautifull world ?
Why doesn't education teaches more about human sciences ?
Why do we pay taxes aswell for putting mines as demining them ?
Why do factories or aerocompanies close when demand is so big ?
Why are farmers payed to destroy or not produce, while so much hunger ?
Why so much short of housing ?
Why our dogs and cats eat more money than some earn ?
Why their system survives by means of crises, wars and exploitation .
Why do we keep on collaborating while modern fascism is so strong ?
Why our media talk in favor of what's going on ?
Why is the right to vote, the right to say yes to the system ?
Why don't we put forward our own program first ?
Why don't we defend our own alternative in the enterprises we work ?
Why don't we invite the jobless to join our reunions ?
Why don't we develop our new strategy to put our demands in power ?
Why we really want to show solidarity, but we are divided in lots of groups. …with no international action plan…

Political essays in English, starting from page 79 on http://users.skynet./octo.be

I wrote about articles concerning the situation in a lot of countries and about the way politics is been conducted http://filosofischverzet.skynetlogs.be (mainly Dutch). I wrote a lot about history and some essays in English can be found on http://bloggen.be/conscience2008 as well . (and historic tales of people having lived in certain periods as well on other blogs. http://voortijdgtestament.skynetblogs.be and the links. A complete mini overlook of history can be found starting from page 62 on http://users.skynet.be/octo (Dutch). I put all these things in to every kind of literature as you might understand following all the links that make a combined art piece of the totality of my blogs; dealing as well with philosophy, soci-econ-polit., history, psychology, love problems, religion, soul, spirit… . blogartist
Gepost door combination op 01:11