On the border of impressionism 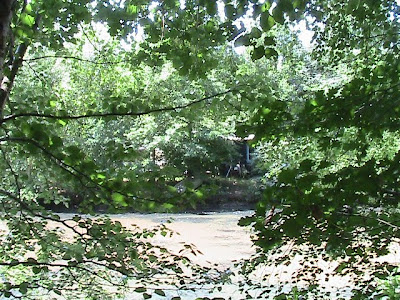 Trying to pass the borders of impressionism.
Because there are people one knows involved, no one can write a complete proza documentary about just what was one day in his or hers lifetime. Also due the fact that at a certain moment one is ready to begin writing such description, the reader will not be able to follow because of the complexity of one's past that is determined for a part by events in the past.

So that is why one always has to choose between fiction and reality, between the daydream and the situations one has to adept oneselves on. Each thought is a novel on it's own if one would pay attention to it and mingeled with fanthasy a thousand novelles. Each dream is a puzzle of a lot of things that happened in a lifetime over generations. Time does not exist. Each moment of a minute, sometimes splits of a second, is so intense to write about that, if one is a writer, one cannot support any more in the end or just survive by observing and enjoying and making sense. In order to achieve a part of this wanting to explain about the codes of life in a narrative way, one should be a lot alone perhaps...I do not know, I'll have to find out...but the energy of achieving the aims described, is lacking me at this moment. Shall I try to write a prelude (french word,an introduction, which again is a French word ?) about the past or start with the day itself today or go to sleep for half an hour to recover ? Or shall I look upon you as my private detective trying to find out in this day to day story of mine, how my live and maybe yours was ?

Woke up with my neck hurting more than the day before and a kind of fatigue that went away. Had a 'talk' with a virtual friend about dreams and situations in daytime, but then not trying to fix the events it self, but interpretate them on a broader scale. Nice that in English the word 'friend' is not substitute for male or female. A friend is rather someone one can talk or write with on a more or less the same dimension of vibrations. And if it's a virtual exchange one does not feel like one will have a suposingly real encounter where one falls in love and by consequence having to endure all the responsibilities, joies and hardships based on the realities of the other persons life.

I dreamt that a bloke with a lot of primitive and rough and in a way brute fysical energy tried to seduce a friend of mine. He wanted to conquer her innocense in a mainly instinctive way. At first my reaction was 'let it go, it's not your life', but the feeling kept persecuing me and then I met an old tired Indian woman who told me to controle the blood pressure this has caused in my body. She maybe has saved this house of that soul of mine, and that is why my spirit is back on the track of continuing 'it's' spiritual tasks...for the sake of being a kind of assistance to all those who have managed not to live pureally superficial.

Me and my neck rested for a while and the fatique due to a life with a lot of tasks and due to the part isolation, slowly disapeared a bit, due to the fact that I let my ghost speak to my tired body, encouraging it from within the spheres of 'heaven' present as well in everything and everyone on earth, but most of us do not really know or can't reach the same dimension any more or not yet.

A cup of thee or coffee ? I had run out of water of the source in the wood, so it took some of the kitchen tap. The water was presumed to be the best, because of a lot of controle and addition of...I do not know. Nature's tap was to far away today for me to go and get it. The fellow occupants of my house were at work and I went outside to say the dogs hello, after eating some of the meal of yesterday and sharing the rest with them. The only animals whose meat I eat are, from time to time in a limited way 'chicken' and some fish from time to time. And hopefully, most of the time chicken that were not emprisoned in factories all of their lifetime.

In a village with tries not to become a town, I met the young man who wanted to make a living of his dream, providing food and a drink to his clients, which were more friends to him. He asked me how my writing got along and I answered him I had started writing in English and that I still was helped by the computer to avoid spelling errors...but that the computer wasn't so human as to underline the words thought and taught, because they both are correct...but it depends on how you use them. This restaurant-café keeper has a replica of one of Renoirs paintings in his establishment. I look upon it at each visit and so I said : 'I saw the film 'la fabuleuse destin d' Amelie Poulain' lately again. While living in her world of fantasy, she always was trying to help people by bringing them together or playing jokes with someone who mistreated an other person. There was that role of a painter in the movie who was making a copie of Renoir's summer ball...he advised Amelie to grasp her own hapiness in her attempt to meet the love of her live...and in response the painter and other personages received a lot of blessings as well.

There were some woman in my view on the owner of the 'goodlife'- terras, waiting for the buss at the other side of the street. One nice dark woman from Africa with a lot of pounds extra, sat on the stone before the window of a house...like as if she was meditating. Had she found hapiness in mariage or was she misused on this or the other continent...or in both cases and even if she was unhappy, was this the consequence of the wrong choices she made before she emigrated ? A bit of an Asian women came to sit next to here and they looked understandingly at each other, without talking. Do only coulered people take the bus in this place ? A Caucasian woman pushing a child in a baby-carriage came along...and an other white skin one with a happy little black-white dog came along. Wish Renoir was here. Maybe he was, with all that talking going on about him...as a consequence of what he did. Since time in fact does not exists, he must be somewhere, I thought. And while I write it I wonder if I did not write 'taught' in stead of 'thought' in a phrases like this. Sorry, no energy left to go back and correct it. It's a bit like life...the past, try to deal with it as much as possible, but avoid having to make corrections in this day itself. Make your day, not interfering to much with earlier evolutions who have had their flow. Try to have a panoramic view on people and things, or you will get lost among to narrow conditions. It is like a heard this man say in a documentary about Darwin and his Beaggle boat : "I love the Amazone, but do not expect it wil love you back. In fact the Amazone is very happy to see me coming...because it is very hungry : mousquittos, snakes like the anaconda, some fish...they surely love me in their own way. So did my cat and my chicken when I came home. The cat pushes her head against my giving hand to thank me and the chicken lays her daily egg and expects no special things in return...forgotten of the times when she was a dinosuarus. Maybe her kind has become humble through all these years of evolution ? Still there is a kind of mean dino-look when she mistrusts me and is not singing her relaxed song.
Gepost door combination op 07:31